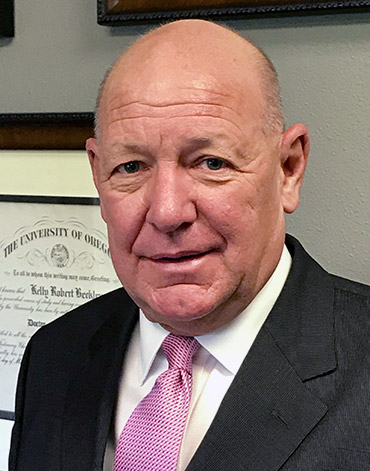 Kelly R. Beckley graduated from Washington State University and the University of Oregon Law School. He was admitted to practice in Oregon in 1974. He practiced as an Air Force Judge Advocate in California and Germany between 1974 and 1979. Since 1979, he has been in private practice in Eugene. Mr. Beckley is a member of the American, Oregon State, and Lane County Bar Associations. He is admitted to practice before the Oregon Supreme Court and all other Oregon Courts, the Supreme Court of the United States, the Ninth Circuit Court of Appeals, the United States District Court for the District of Oregon, the United States Tax Court, and the Court of Appeals for the Armed Forces. He is a Master Member of the American Inns of Court, a professional association of Judges and litigators. He is also a life member of the Oregon Criminal Defense Lawyer's Association and the National Association of Criminal Defense Lawyers. Between 2004 and 2006, he served as a lawyer representative to the Ninth Circuit (federal) Judicial Conference. Mr. Beckley has taught business law courses for the University of Maryland, European Division, and Trial Practice Seminars for the University of Oregon Law School. Between 1980 and 2004, he served as an Air Force Reserve Judge Advocate. He retired in 2004 in the grade of Colonel as the Senior Reserve Judge Advocate at the United States European Command Headquarters. In 2009, he was named by the Eugene Register-Guard as the Readers' Choice Winner as the most effective attorney in Eugene/Springfield.